If you’re someone who has lived their lives in the same country or even in the same city where you were born, you might have a hard time understanding the challenges of the question “Where are you from?”, but when you’ve lived in different cities, countries, and even continents, the question can put you on the spot. 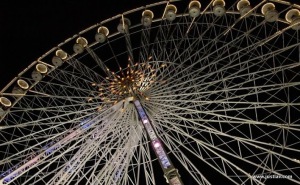 So where exactly am I from? The place where I was born in, but where I haven’t lived for the past 12-13 years, or the place that has become my home in the past few years? Every time I travel outside US, I’m faced with the same challenge. How do I answer the question for a random curious person, a hotel concierge who’s being nice to me, or a taxi driver who picks me up at the airport? I don’t necessarily want to give them the whole story and explain that I’m from one country, but I’ve lived in 3 others, but at the same time I don’t know what to choose. My passport says Romania, while my driver’s license says California. If they ask how the weather back home is, the only answer I have is about Los Angeles.

I know people who would never renounce the place they were born in, who always refer to it as their home, but I would be untruthful to do that. After all most of my adult life memories are not from there. I don’t see it as going home, I see it as going to visit my parents, even though their apartment is my childhood home, the room I slept in the last time I was there was the same room I slept in for my entire childhood. It’s somehow my home, but it isn’t.

So what exactly determines where I’m from? Am I thinking too much in terms of labels instead of just accepting that I am a citizen of this world and that I’m one of those people who can make a home in any country and find a way to be happy and be part of the local culture? So maybe instead of no country for the traveling man, it’s one entire planet, a whole globe to wander and call home.