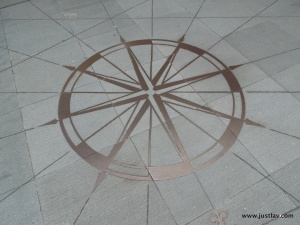 “The language of the Pormpuraaw, a small Aboriginal community in northern Australia requires them to know at every step where all the cardinal points are, just like a compass. They don’t have street names or Google Maps; they use the simple North, South, East, and West to find their way. Therefore they are just as exact as a high performance compass when asked to point North. They don’t have words for left or right, nor do they have forward or back, they only have the cardinal points to position themselves, which has turned them into human GPS systems.

When I first started using a GPS, I remember being annoyed when the android voice would start off by saying: Head West on 3rd Street. I lived in a country where there was no ocean that could give me a clue of where West was, so I just wished I could receive directions that sounded more like turn left or turn right. Had I been born or at least spent some time with the Pormpuraaw, maybe I wouldn’t have needed a GPS at all.

Could they teach us to better find our way when the wonders of modern technology are not available? Quite possibly!

If we look even deeper at this difference in positioning, we notice that the Pormpuaaw always thing of themselves in relation to the earth and the sky whereas western culture sees geolocation as a self oriented notion. We don’t position things according to their position on earth, but according to their relative position to us. Maybe if we had the ability to position things in relation to the world as a whole instead of the relative position to us, we wouldn’t lose our direction so often in life. We would know at every point where we stand no matter how much things around us change.”