After over a year and a half of #magicmondays quotes, I decided to change it up a bit and have a blog post inspired by a famous quote every Monday to start off our week on the right path. 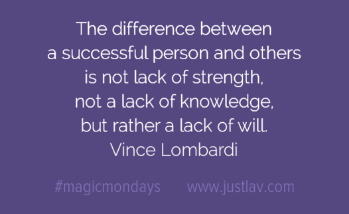 This week we’re starting off with a wonderful quote by Vince Lombardi, “The difference between a successful person and others is not lack of strength not a lack of knowledge but rather a lack of will.”

While there have been many NFL coaches out there who have done a lot of amazing work for their teams and for the world of American Football in general, Vince Lombardi is the only one that the Super Bowl Trophy is named after, the only one recognized as the greatest football coach of all times, known for his ability to motivate teams and turn them into winners.