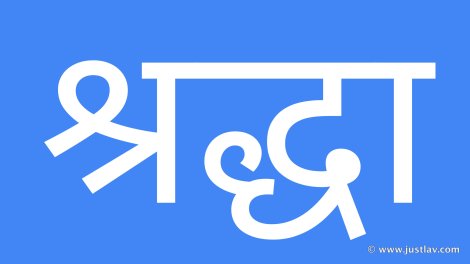 I was doing research on sacred Sanskrit words last week and I came upon one that might just be my favorite one in the entire universe. Well, in addition to the lovely Romanian word “dor” and its better known, yet perfect synonym in Portuguese, “saudade”. While “dor” is a gentle and beautiful way of expressing a feeling of longing, melancholy, or nostalgia, this new word I discovered श्रद्धा (Śraddhā) is has a multitude of meanings, one more beautiful than the other as it can be associated with faith, trust, confidence, and loyalty.

Amma, also known as the hugging saint describes it as the “constant alertness arising from Love”, and when choosing a single word to translate it into English, has used “awareness”.

Sri Aurobindo, one of the most influential leaders in India, a philosopher, yogi, guru and poet described Śraddhā as “the soul’s belief in the Divine’s existence, wisdom, power, love and grace.”

Other writers have also described the concept with emphasis on the intersection of faith and mindfulness, and it has been translated in this vein with words such as “diligence”.

The word has so many other meanings though it’s hard to actually describe it which is why most hindus and buddhists have used feelings associated with divinity and trust in a higher power to represent it.

श्रद्धा (Śraddhā) is the perfect view and perfect resolve, regarded as the virtue out of which all the others develop and which opens the door of liberation to even those who do not have the self-discipline to tread the path of meditation.